Since joining forces as a professional duo in 2009, internationally acclaimed solo pianists Eva-Maria Zimmermann and Keisuke Nakagoshi — ZOFO — have electrified audiences from Carnegie Hall to Tokyo with their dazzling artistry and outside-the-box thematic programming for one-piano-four-hands. This Grammy-nominated, prize-winning Steinway Artist Ensemble — one of only a handful of duos worldwide devoted exclusively to piano duets — is blazing a bold new path for piano four hands groups by focusing on 20th and 21st century repertoire and by commissioning new works from noted composers each year.

ZOFO, which is shorthand for 20-finger orchestra (ZO=20 and FO=finger orchestra), also performs heart-pumping duet arrangements of famous orchestral pieces such as Stravinsky’s Rite of Spring, exploring the realms in which many composers first experienced their symphonic visions. ZOFO believes that the piano duet is the most intimate form of chamber music, with two musicians playing individual parts on one instrument in a complex, often beautiful choreography of four hands.

ZOFO’s concert programs often incorporate a unifying theme that connects the works both musically and historically. Several of these thematic programs have been released worldwide as critically acclaimed commercial CDs under their multi-disc recording contract with Grammy Award-winning label Sono Luminus Records. Their 2013 debut CD Mind Meld was nominated for two Grammy Awards for Best Chamber Music/Small Ensemble Performance and Producer of the Year.

ZOFO made its Carnegie Hall debut in 2010, the same year they won the Bradshaw & Buono International Piano Competition. ZOFO was the only piano duo to be elevated to the final round in the 2011 Osaka International Chamber Music Competition. They have performed at a wide variety of concert venues across North America, Europe, Australia, and Japan, including intimate, informal spaces; colleges and universities; and major concert venues such as the Tokyo Opera Recital Hall, the Sydney City Recital Hall, and Tonhalle Zurich. ZOFO has participated at numerous festivals such as Murten Classics in Switzerland, the Sun Valley Music Festival in Idaho, the Music on the Heights International Chamber Music Festival in Poland, and the Kusatsu Summer International Academy and Festival in Japan.

Committed to contemporary music, ZOFO duet has commissioned more than thirty works by noted composers including Pulitzer Prize-winner William Bolcom, Gabriela Lena Frank, Terry Riley, Akira Nishimura, Carl Vine, Pawel Mykietyn, Franghiz Ali-Zadeh, Pablo Ortiz, and many others. For their cutting-edge project ZOFOMOMA – New Pictures at an Exhibition, ZOFO commissioned new works from 15 top composers around the globe, and requested each to select a painting representative of his or her culture as a springboard to the creative process. With this project, ZOFO was invited to a nine-concert Australia tour presented by Musica Viva in spring 2019. ZOFO's newest projects are two commissions of one-piano four-hand concertos by Australian composer Carl Vine and Argentinian-American composer Pablo Ortiz.

Stravinsky – The Rite of Spring, Part 1

Gabriella Smith – From Máncora to Huaraz

“Let’s play a duet! — Ok, sure! — Wait, I can’t play this key. Oh, it’s part of your right hand chord. Can you release your note sooner? — Yes, but can you move over a bit, so I have space for my elbow during this run? — This measure is really awkward for me. Can you take over my right hand notes here and I’ll take your left hand chord instead? — Sounds like a good trade, but please pedal more clearly … Never mind, I’ll just take it over for this section. — Can you pull back your sleeves please, I can’t see where I’m supposed to play! — I can’t move, you’re sitting on my jacket. — And you’re stepping on my dress!”

Let’s Play a Duet! illuminates the challenges and excitement of playing piano duets with unconventional choreographies. The first version of Stravinsky’s famous ballet The Rite of Spring was written for piano duet. With its at times wild arm crossings and split–second position–changes, this version is ballet and music all in one, bursting with raw energy and drive. The Milky Way by Estonian composer Urmas Sisask lets us drift away into a cosmic soundscape created by resonances seldom heard from pianos. The players not only share the keys, but also the strings of the instrument. Turkish–American composer Erberk Eryılmaz brings us back to Earth with Play!, a piece that recreates the intensity kids often have at play. Terry Riley’s G–song was originally written for the Kronos String Quartet. With mesmerizing choreography, ZOFO’s arrangement solves the challenges of transcribing the overlapping string parts for four hands on a shared instrument. Let’s play a duet! — the namesake of the program — breaks all territorial conventions of playing piano duet. This is definitely a piece you need to hear AND see! The second ZOFO–commissioned piece in this program, From Mancóra to Huaraz by Gabriella Smith, is inspired by the rhythm and perpetual motion of a bus ride between these two Peruvian cities. Only one player is seated at the piano while the other one leans into the piano to create percussion sounds.The program ends with the famous La Valse by Maurice Ravel in Lucien Garban’s arrangement. Although less unconventional in its choreography than the rest of the program, it embodies what playing four–hand piano often is about — a dance.

Phantasma: The Dark Side of Fairytales

Phantasma, phantom, fantasy, fantastic! In this program we explore the world of wonder and imagination. In Casella’s Pupazzetti and Stravinsky’s three movements of Petrushka puppets are coming to life and, unfortunately, experience spurned love and jealousy. Sounds appear as Fata Morganas in Synaesthesia, written by ZOFO’s own Keisuke Nakagoshi. We pay a visit to hybrid creatures of Roman and Greek mythology in both Debussy’s Prélude à l’après–midi d’un faune and Pavkovic’s Chimaera. Originally composed for player piano, the latter is brought to musical life with beautiful melodic lines, accompanied and interrupted by voices of mechanical wildness. The program closes with Dukas’ sparkling L’Apprenti Sorcier, based on Goethe’s ballade “Der Zauberlehrling” and featured in the Disney film “Fantasia” (1940).

ZOFORBIT takes the listener on a voyage through outer space. Estonian composer Urmas Sisask’s The Spiral Symphony sets the mood with otherworldly sounds, featuring innovative inside–piano techniques that evoke a sense of the cosmos. The short movements serve as a sonic spaceship to transport the audience from one planet or star to another. Starting on Mars, the Bringer of War, the journey continues to tour Gustav Holst’s The Planets and pays visits to the stars Alpha Centauri and Beta Cygni as musically envisioned by George Crumb in his one–piano–four–hands masterpiece, Celestial Mechanics. David Lang’s gravity gives the impression of falling without ever landing. Before taking off for infinity, we alight on a planet for the last time—Venus, the Bringer of Peace.

This program offers an adrenalized exploration of dance–themed duet compositions by six distinctly American voices of the 20th and 21st centuries—George Gershwin, Allen Shawn, Samuel Barber, John Corigliano, Terry Riley, and Paul Schoenfield. The pieces featured on MOSH PIT encompass a wide range of evocative dance styles and rhythms; from Gershwin’s driving rhumba–rhythms in Cuban Overture to Barber’s sensuous Hesitation Tango to Paul Schoenfield’s dizzying Boogie from Five Days from the Life of a Manic Depressive. ZOFO’s album of the same title was released by Sono Luminus in 2013. Drawing inspiration from classical, modern, jazz and rock and roll forms, the MOSH PIT  repertoire and ZOFO’s inspired interpretations might tempt you to the dance floor.

Stravinsky – The Rite of Spring

Mind Meld brings together stunning duet works by four noted 20th century composers and pianists who knew each other, learned from each other, and sometimes shared the bench. As young students at Harvard, Leonard Bernstein and Harold Shapero teamed up as a piano duo before Bernstein’s career exploded. Shapero wrote his Sonata for the two of them. Stravinsky read through the one–piano–four–hand score of his Rite of Spring together with Debussy in the home of their friend Louis Laloy, before any orchestra had touched the work. Debussy later wrote to Stravinsky about the Rite of Springas a “beautiful nightmare.” Released by Sono Luminus in 2012, ZOFO’s album Mind Meld was nominated for Grammy Awards in the categories of Best Chamber Music/Small Ensemble Performance and Producer of the Year, Classical. The album and live performance program continue to attract positive critical attention around the world. 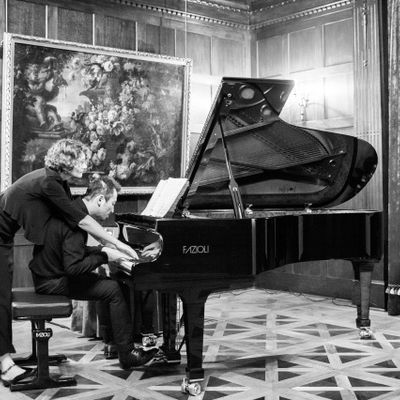 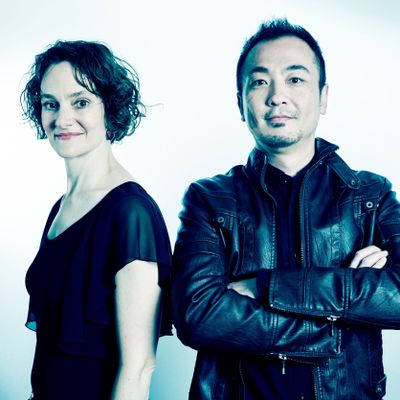 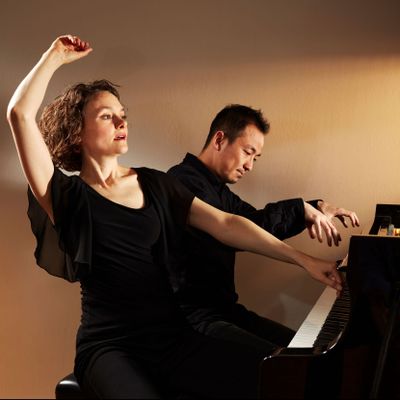