The Tesla Quartet is known the world over for their “superb capacity to find the inner heart of everything they play, regardless of era, style, or technical demand” (The International Review of Music). From cutting edge contemporary works to established masterpieces, the Tesla Quartet’s emotive and thoughtful interpretations reveal the ensemble’s deep commitment to the craft and to their ever expanding repertoire. The quartet recognizes the power of their platform to amplify underrepresented voices and to encourage the proliferation of an equitable and just future for society as well as a hospitable climate for posterity.

Now entering its second decade, the quartet performs regularly across North America and Europe, with recent highlights including their debut at New York’s Lincoln Center, a return to London’s Wigmore Hall, and performances at Stanford University’s Bing Concert Hall as winners of the prestigious John Lad Prize. Other recent international engagements include tours of Brazil, China, and South Korea. Notable festival appearances include the Banff Centre International String Quartet Festival; the Joseph Haydn String Quartet Festival at the Esterházy Palace in Fertőd, Hungary; the Mecklenburg-Vorpommern Festival in Germany; and the Festival Sesc de Música de Câmara in São Paulo, Brazil. Having served as the Marjorie Young Bell String Quartet-in-Residence at Mount Allison University in New Brunswick, Canada from 2016-2017, the Tesla Quartet also recently completed a four-year community residency in Hickory, North Carolina that included performances and workshops at local colleges, universities, and in the public school system, as well as a dedicated chamber music series.

Remaining true to their ethos, the Tesla Quartet has proved unwavering and resilient in the face of global depression. From the safety of their own homes, they overcame technological hurdles in order to cheer on the healthcare heroes of the New York Presbyterian Hospital network with weekly concerts throughout the city’s darkest hours. Addressing the needs of those within the music community, the Quartet commissioned 12 works by composers from across North America for their online series Alternating Currents, an homage to Beethoven and a celebration of diverse voices. Tesla Quartet has also helped pioneer ImmerSphere, an immersive augmented reality virtual concert experience, bringing familiar community stages directly into the homes of concert-starved audiences. With renewed hope for a brighter future, the Tesla Quartet is focusing its efforts in the coming seasons on inspiring climate action with the commissions of several full length works for string quartet that touch on different aspects of the climate crisis and recovery, in addition to premiering Jeff Nytch’s piece decrying deforestation, Song of the Lorax.

In 2018, the Tesla Quartet released its debut album of Haydn, Ravel, and Stravinsky quartets on the Orchid Classics label to critical acclaim. BBC Music Magazine awarded the disc a double 5-star rating and featured it as the “Chamber Choice” for the month of December and Gramophone praised the quartet for its “tautness of focus and refinement of detail.” They released their second disc on the Orchid Classics label in October 2019, Joy & Desolation, a collaboration with clarinetist Alexander Fiterstein featuring quintets by Mozart, Finzi, John Corigliano and Carolina Heredia. The Classic Reviewraved, “From the outset, the quartet plays as a single instrument. Their sound is balanced across registers, their timbres and articulations matched" and The ArtsFuse called it “a compelling, diverse album from one of the best chamber ensembles (and clarinetists) out there.”

The Tesla Quartet builds upon years of early success at numerous competitions including multiple top prizes at the prestigious 2016 Banff International String Quartet Competition, 2015 International Joseph Haydn Chamber Music Competition, and 2012 Wigmore Hall London International String Quartet Competition. The group originally formed at The Juilliard School in 2008 and quickly established itself as one of the most promising young ensembles in New York, winning Second Prize at the J.C. Arriaga Chamber Music Competition only a few months after its inception. From 2009 to 2012, the quartet held a fellowship as the Graduate String Quartet-in-Residence at the University of Colorado-Boulder, where they studied with the world-renowned Takács Quartet. They have also held fellowships at the Aspen Music Festival’s Center for Advanced Quartet Studies, the Britten-Pears Young Artist Program, and the Norfolk Chamber Music Festival.

One of the striking features of Schubert’s music, particularly his late works, is the breadth of his expression. His String Quartet No. 15 in G Major, D. 887, immediately calls expectations into question, but rather than dissect a theme, Schubert creates the space and time to explore an idea, to live with it and absorb its nuances. It’s much more about the journey of discovery than the arrival at the destination.

In his String Quartet in C major, Op. 76 No. 3, Joseph Haydn presents a different type of grandeur, that of nobility. The work bears the subtitle “Emperor” for its central slow movement, which is a set of variations on the “Kaiserlied,” the national anthem Haydn penned to honor Austria’s Emperor Francis II.

In Plan & Elevation, Caroline Shaw depicts various areas of the grounds of Dumbarton Oaks, a museum in Washington, D.C., in a nod to both its architecture and her experience of artistic growth as the museum’s inaugural music fellow.

Folk music has always provided an inspiring repository of material for classical musicians. Florence Price, a pioneering African American woman composer, drew on African American spirituals and folk songs for her Five Folksongs in Counterpoint of 1951. The music of Steven Snowden’s Appalachian Polaroids grows out of a 1970’s field recording of Sheila Kay Adams singing Black is the Color in Asheville, NC, and captures the unique sound of the mountainous American South. Elliott Bark’s Minyo Medley is a transcription of three popular Korean folk songs, mimicking traditional drumming and vocal styles. Perhaps the one composer who made the most of his exposure to traditional peasant music was Béla Bartók. Bartók spent years traveling throughout Eastern Europe collecting the traditional music of the peasant population far from the urban centers. His thorough study and exploration of this folk music led to his development of a unique musical language that assimilated many different styles of music into one voice, a prime example of which is his String Quartet No. 4.

“Though free to think and act, we are held together, like the stars in the firmament, with ties inseparable. We cannot see these ties, but we can feel them.” –Nikola Tesla

From the moment our ancestors first gazed up at the night sky, humanity has been fascinated with the heavens. The idea that the movements of heavenly bodies created universal harmonies—musica universalis—was both a scientific and spiritual belief propounded by great thinkers from Pythagoras to Keppler. While composing the slow movement to his E minor String Quartet, Op. 59 No. 2, Beethoven is said to have been “contemplating the music of the spheres.” With Moonshot, Alistair Coleman commemorates the 50thanniversary of the Apollo 11 moon landing, charting the journey from Earth and back. In Celeste Forma, Bobby Ge explores the birth of stars, from nebulous collections of space dust to the violent and energized phases of development that ultimately end up as a fully-formed star. Using the concepts of orbit and circular motion, Garth Knox employs unconventional and original instrumental techniques to create unique sound worlds in his quartet, Satellites. 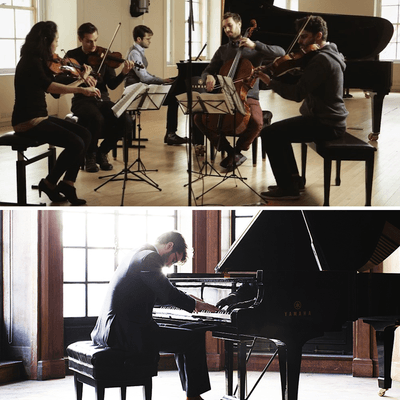 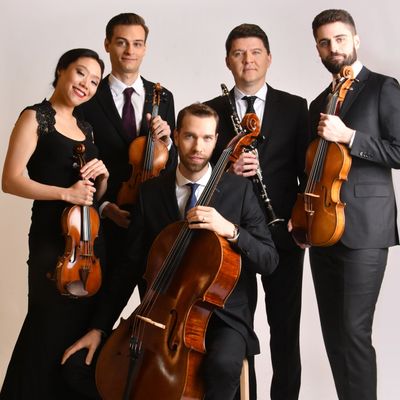 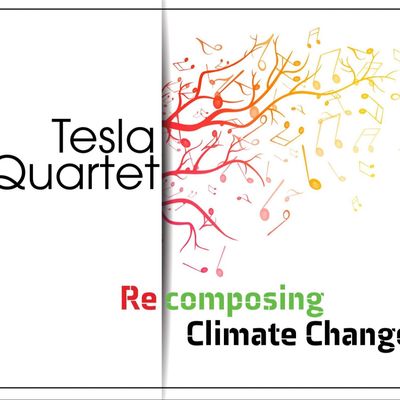 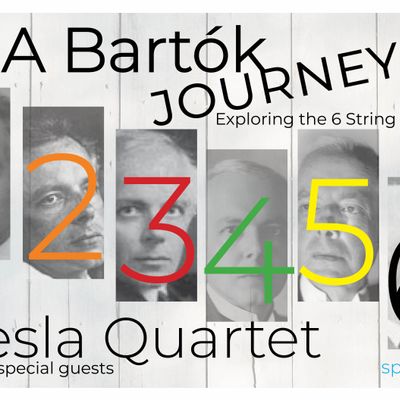 “I love these sessions. It's really wonderful to have the opportunity to watch you do this work, and hear your thought…