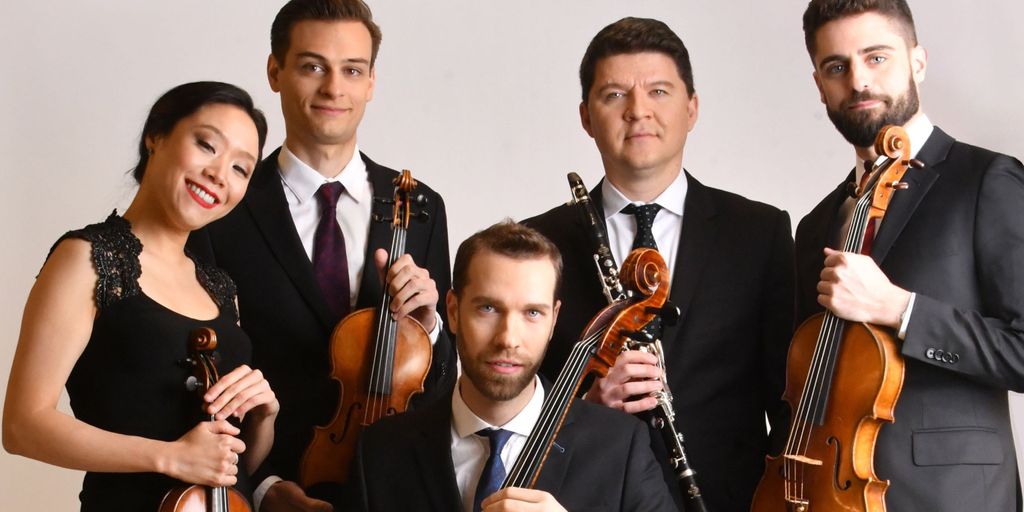 The Tesla Quartet is joined by clarinetist Alexander Fiterstein in this program of clarinet quintets that span over 200 years. Mozart’s beloved Clarinet Quintet in A Major serves as the foundation of this collaboration and was the first piece Alex and the Teslas ever played together. Such was the chemistry and ease of collaboration during these first performances that the five musicians decided to record an album together comprising a variety of works for clarinet and string quartet.

Published in 1945, Gerald Finzi’s Five Bagatelles were written over a span of 25 years. While they were originally conceived for clarinet and piano, this arrangement by Christian Alexander takes advantage of the ability of the quartet to sing, creating a rich texture around the clarinet that can transform from a somber chorus to a boisterous conversation.

John Corigliano’s Soliloquy, originally the slow movement of his Clarinet Concerto, is dedicated to the memory of his father, violinist John Corigliano, who served as concertmaster of the New York Philharmonic for 23 years. The delicate and spare texture of this work expresses the desolation at the loss of a loved one.

The newest work on the program, Argentinian composer Carolina Heredia’s Jus in Bello is a reaction to the political and social upheaval in Venezuela and the repression of its citizens that has been going on since 2014.

“I am so delighted to have the wonderful combination of the Tesla Quartet and clarinetist Alex Fiterstein performing my “Soliloquy”. This is a very special piece for me, as it is taken from the slow movement of my clarinet concerto, which was written in memory of my father, John Corigliano. He was the concertmaster of the New York Philharmonic and died a year before the concerto premiered with that orchestra. Alex has the ability to spin the long lines this piece demands, and the Tesla Quartet can provide the suspended atmosphere of clarinet, solo violin, and hushed chordal background to complete the picture.”