In their highly professional, exact interpretations, they explore the relationship between individual expressivity and artistic collaboration, captivating listeners with their joy for playing and emotional depth. This eagerness to communicate, along with their acute perception of one another, allows virtually “una voce” articulation. The resulting effect is far-reaching both sonically and musically, with the saxophone’s entire spectrum of colour coming brilliantly to light. After their international debut in the Great Hall of Tchaikovsky Conservatory Moscow and a concert in London’s Wigmore Hall, an invitation to play in Berlin Philharmonie in 2017 marked a new milestone in their career.

Arcis Saxophone Quartet was founded in 2009 at the University of Music and Performing Arts Munich and studied chamber music under the Artemis Quartet at the Berlin University of the Arts with additional instruction from Koryun Asatryan and Friedemann Berger in Munich. The quartet has been a member of the European Chamber Music Academy (ECMA, Prof. Hatto Beyerle, Prof. Johannes Meissl e.a.) since 2014. They are supported by scholarships from Yehudi Menuhin Live Music Now and the PE-Förderungen for Students of Music.

Endless prairie landscapes; the exciting pulse of the city that never sleeps; the swinging life of the Southern states; stories full of dreams, hopes, and love: in American Dreams, the Arcis Saxophone Quartet takes the audience on a journey through a broad musical exhibition of the American way of life.

In the Great Masters, the Arcis Saxophone Quartet assembles works by many of history’s greatest composers. Every epoch had its masters and masterpieces, and in this program, the quartet presents Ligeti, Haydn, Bach, Bartók, Mendelssohn, and Gershwin in such shining new colors, the Tageszeitung Munich asked, “Do you ever want to hear it differently again?”

Throwing yourself into the unknown, daring to be crazy, thinking the impossible, and giving a personal touch to tradition: True art is always innovation. The composer has to juggle with both the tradition and the new and has to find and create their own path. The Arcis Saxophone Quartet lets the most exciting moments of this search for the unknown shine like in a kaleidoscope of innovations. Thrilling discoveries guaranteed! 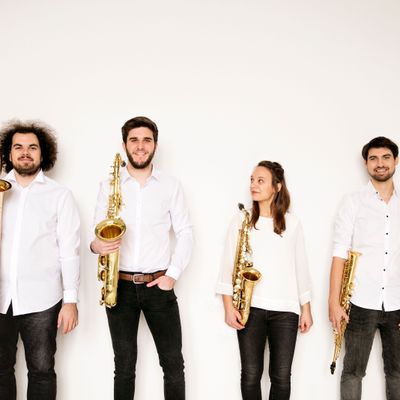