The Thalea String Quartet brings their signature vibrancy and emotional commitment to dynamic performances that reflect the past, present, and the future of the string quartet repertoire while celebrating diverse musical traditions from around the world. Fueled by the belief that chamber music is a powerful force for building community and human connection, the Thalea String Quartet has performed across North America, Europe, and China, and has appeared at the Kennedy Center, Massey Hall, and Weill Hall at Carnegie Hall. They have shared the stage with luminaries of the chamber music world, including members of the Emerson, Borromeo and St Lawrence String Quartets, and they have performed alongside celebrated artists including Pulitzer Prize-winning composer Caroline Shaw, violist Lawrence Power, acclaimed Canadian band BADBADNOTGOOD, and visionary hip hop artist Jay Electronica.

Committed to shaping and contributing to the future of the string quartet repertoire, the Thalea String Quartet has premiered dozens of new works and have collaborated on new commissions with composers including Paola Prestini, Anthony R. Green, Akshaya Avril Tucker, and Tanner Porter.

Winners of the 2021 Ann Divine Educator Award from the Fischoff National Chamber Music Competition, the members of the Thalea String Quartet have been celebrated for their innovative approach to education and community engagement.

Christopher Whitley (violin) is originally from Toronto, Ontario, Canada, Kumiko Sakamoto (violin) is from Medicine Hat, Alberta, Canada; Lauren Spaulding (viola) is from San Antonio, Texas, and Titilayo Ayangade (cello) is from Cincinnati, Ohio. Christopher performs on the 1700 “Taft” Stradivari, generously on loan from the Canada Council for the Arts Musical Instrument Bank.

American musical traditions have had a massive global impact. Shaped by the richly diverse people, cultures, and communities that call it home, the musical legacies of the United States have also inspired composers of the Western art music tradition. Legacies explores the influence of American musical legacies on the string quartet repertoire. Gabriella Smith’s Carrot Revolution uses string techniques from bluegrass fiddle music to thrilling effect. Alexander Vittal channels American rock ’n’ roll by way of Liverpool in his richly detailed arrangement of the B-side of the Beatles’ Abbey Road album. Channeling hip hop and the blues, DBR celebrates the life of the great civil rights figure Rosa Parks in his fifth string quartet. Finally, in one of the most revered homages to American music, Dvořák honors the Black spiritual in his most famous work for the string quartet.

Daniel Bernard Roumain – String Quartet No. 5, “Parks,” i. “I made up my mind not to move”

Composed in 2020 for the Thalea String Quartet, Paola Prestini’s seven movement work for string quartet was inspired by Carl Jung’s The Red Book, an incredible work of philosophy, art, and mysticism. Jung’s imagery and text plumb the depths of the collective unconscious, evoke the natural world, and explore thousands of years of mythic traditions. Equally as evocative, the featured works by DBR, Jessie Montgomery, and Tanya Tagaq draw on 20th century American history and musical traditions, and explore humanity's relationship to the natural world. 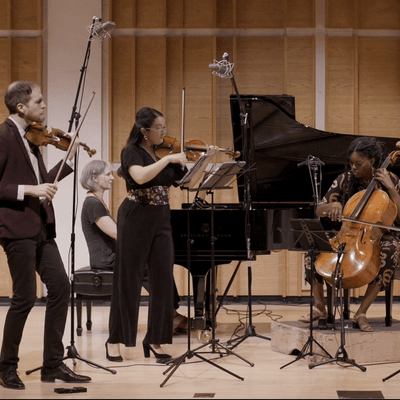 Prospects of a Misplaced Year

Winners of the 2021 Ann Divine Educator Award from the Fischoff Competition, the Thalea String Quartet has been recognized internationally for their innovative approach to education and community engagement. The quartet has developed a wide-range of programming, including presentations for young people with special sensory needs and activities for lifelong learners.

The Thalea String Quartet believes that exposing new audiences to chamber music is one of the most important facets of our work as a quartet. The Thalea has performed for students around the world, from California to China, in classroom, assembly, and small group settings. Building unique and engaging musical experiences for people of all ages is one of the quartet's core values. In addition to demonstrating the rich history of the string quartet repertoire, recent educational programs have been designed to explore topics such as non-verbal communication skills, diversity in Western Classical music, and American history.

The Thalea String Quartet offers masterclasses and clinics for music classes, school orchestras, and instrumental ensembles of all levels. Thalea masterclasses for K-12 students introduce students to the basics of chamber music. Placing special emphasis on listening, non-verbal communication, and rehearsal strategies, the Quartet encourages young students to discover their individual artistic voices in a supportive and fun environment.

In April 2018, the Thalea helped launch a string program to provide opportunities for music education to individuals with autism of all functionalities. The Quartet worked with pianist Steven Prutsman and Autism Fun Bay Area to create a unique curriculum where children and adults with autism learn violin, viola or cello together with their caregivers. The Thalea String Quartet continues to serve audiences with special sensory needs through teaching and sensory-friendly performances.

All of the Thalea String Quartet's offerings for K-12 students can also be presented virtually. The Thalea's virtual programming can also be supplemented with a variety of original virtual content including their online video series Hello Haydn!

Created in 2020 in partnership with the Caramoor Center for Music and the Arts, Hello Haydn! sought to address the challenges of virtual teaching artistry in the midst of a global pandemic. Consisting of a series of five short videos with corresponding response activities, the program invites students to explore the different roles found within a string quartet. These fun, engaging videos use a classic work by Joseph Haydn to demonstrate how four unique individual voices come together to create chamber music magic!

This modular program can be adapted to almost any educational setting. In its first iteration, the videos were supplemented with virtual visits from the members of the Thalea String Quartet. The Quartet's follow-up video series Bringing Music to Life! was commissioned by Chamber Music Tulsa in 2021 and was presented to every fourth grader in Tulsa, OK through the Any Given Child Program.

In fall of 2020, the Thalea and Austin-based CHAMPS collaborated on a ground-breaking virtual chamber music seminar that brought together young musicians from across the United States and Canada. The seminar dove deep into two fantastic string quartet works and discussed the most important elements of successful string quartet playing, including communication, listening, and teamwork. It was a total blast! At the end of the course, each student created a unique multitrack video that allowed them to perform alongside members of the Thalea String Quartet.

In addition to educational performances, the Thalea String Quartet has presented a number of lecture presentations at collegiate institutions across North America. They have spoken on a number of topics, including diversity in Classical music, discovering and developing your personal artistic voice, and inter-personal communication. They have appeared at Dalhousie University (Nova Scotia), University of Northern Colorado (Greeley), and the Wayne State Medical School, where they presented to first year medical students alongside the Emerson String Quartet.

For collegiate composers, The Thalea's “48 Hour Composition Workshop” challenges young composers to create new works for string quartet in only two days! This week-long workshop includes workshopping sessions, open rehearsals, and a final marathon performance of all the composers’ pieces. The Quartet also offers workshops and discussion sessions on diversity/equity/inclusion in Classical music, and has lead multiple sessions with graduate students at the University of Maryland.

Collegiate level masterclasses and clinics encourage young musicians to fearlessly commit to their individual musical voice while supporting and inspiring their colleagues. The Thalea invites students to delve deeply into each musical score, developing their interpretive skills and specific way to communicate their personal and collective musical ideas.

All of the Thalea String Quartet's university offerings are available in virtual form.

The Thalea String Quartet believes that the joy of music can be shared with learners of all ages. The quartet offers specific, hands-on programming for adult amateur musicians and lifelong music lovers.

Let the Thalea be your tour guides through a variety of masterpieces and underappreciated classics of the string quartet. Offering performance tips, historical context, and tricks of the trade, the Quartet invites musicians and music lovers of all ages to play along, follow the score, or just enjoy this virtual sight-reading party. The first iteration of this program, presented in February 2021, was a huge success. This activity can also be offered in-person.

Modeled after the CHAMPS Virtual Chamber Music Seminar, this adult seminar currently in development invites adult amateur musicians to dive deep into a specific work of the string quartet canon. With emphasis on contemporary works by diverse composers, this asynchronous course offers adult string players the opportunity to continue to develop their technique, artistry, and collaborative skills.