Celebrating their 13th year making music with “faultless detail and refreshing artistry” (I Care if You Listen) as a “collective voice driven by real excitement and a sense of adventure” (The Wire), Akropolis has “taken the chamber music world by storm” (Fanfare). As the first reed quintet to grace the Billboard Charts (May 2021), the untamed band of 5 reed players and entrepreneurs are united by a shared passion: to make music that sparks joy and wonder.

Winner of 7 national chamber music prizes including the 2014 Fischoff Gold Medal, “the performance standards of Akropolis are award winning for a reason” (Fanfare). Remaining the same 5 members since their founding in 2009, Akropolis delivers 120 concerts and educational events worldwide each year and has premiered and commissioned over 130 works by living artists and composers. They are the first ensemble of their kind to grace the stage on noteworthy series like Oneppo (Yale University), Chamber Music San Antonio, Phillips Collection (Washington, D.C.), Summerwinds Münster (Germany), Flagler Museum (Palm Beach), and many more. The “rise of the reed quintet” (Chamber Music America) and Akropolis’ “infallible musicality and huge vitality” (Fanfare) make them one of the most sought-after chamber ensembles today.

Experimenters and creators at their core, “there's nothing tentative in their approach, and that extends to their programming of multifariously challenging and imaginative new works” (The Wire). Akropolis has collaborated with poets, a metal fabricator, dancers, small business owners, string quartets, pop vocalists, and more. Currently, Akropolis is collaborating with GRAMMY-nominated pianist/composer Pascal Le Boeuf and drummer Christian Euman on an album and touring program drawing classical and jazz idioms together to reflect on American identity, entitled, Are We Dreaming the Same Dream?

Akropolis’ chief collaborators are youth and their Detroit community. Winner of the 2015 Fischoff Educator Award and a nonprofit organization which has received 5 consecutive grants from the National Endowment for the Arts, Akropolis runs a summer festival in Detroit called Together We Sound and holds an annual, school year long residency at Cass Tech, Martin Luther King, Jr., and Detroit School of Arts high schools. Akropolis believes anyone can compose great music and during their 20-21 season premiered and recorded more than 30 works by youth aged 12-22 alone.

An engine perpetually generating new sounds and ideas, Akropolis’ 22-23 season will include world premieres by Pulitzer Prize finalist Augusta Read Thomas and Omar Thomas; imaginative renditions of music by Ravel, Bernstein, Rameau, Shostakovich, and Gershwin; Storm Warning, a concerto grosso for reed quintet and wind band by Roshanne Etezady; and touring their recently released 4th album, Ghost Light, lauded for its “range, agility, and grace” (The Whole Note), by “exploring everything from the Egyptian Book of the Dead to racial violence in their native Detroit" (AnEarfull).

The “pure gold” (San Francisco Chronicle) Akropolis Reed Quintet performs worldwide and is represented exclusively by Ariel Artists. They come to you with joy and wonder, ready to be unleashed.

Celebrating the inseparable link between the jazz and classical idioms, the Detroit-based Akropolis Reed Quintet presents jazz-influenced music with Harlem roots. Even from the other side of the world, classical composers have long sought to make the co-evolution of classical music and American jazz clear to their audiences, including this concert’s opening work by Dmitri Shostakovich. Infusing each arrangement with their award-winning, mini-big band style dynamism, Akropolis transforms Gershwin’s massive An American in Paris into an intimate, café-style romp and Leonard Bernstein’s Prelude, Fugue, and Riffs into a Dixieland style celebration. Two Harlem natives, Jeff Scott and Arthur Cunningham, bring elements of gospel, blues, and jump jazz to the classical stage, letting loose Akropolis’ award-winning, tour-de-force spirit.

Annika Socolofsky – so much more (optional video by XUAN)

Akropolis believes that music reaches its height when it is driven by spontaneity and organically developed relationships with community members. Supported by consecutive grants from the National Endowment for the Arts, Akropolis has collected projects from its Together We Sound festival in Detroit into one concert program, featuring percussion and spoken word collaborators from the community in which the program is performed. Optional video by filmmaker XUAN is available to accompany Annika Socolofsky’s so much more, a touching composition including interviews with 7 small business owners from Detroit, Kansas, Colorado, and North Carolina. Opening the concert, Homage to Paradise Valley tours Detroit’s now-lost Black Bottom and Paradise Valley neighborhoods accompanied by poetry by Detroit author Marsha Music, while Sprocket, originally composed for Akropolis and a rideable percussion bicycle designed and built by Detroit metal artist, Juan Martinez, celebrates Detroit’s long standing “slow ride” cycling culture.

Ravel and the Eternal Silence

About his famous Le Tombeau de Couperin and why the composer wrote uplifting music to memorialize his friends lost during the first World War, Ravel stated, “the dead are sad enough, in their eternal silence.” Inspired by Ravel’s courage, and facing a modern world changing so quickly, Akropolis provides an opportunity to remember, tribute, and memorialize things we have lost, and acknowledge loss for its pain and beauty. Accompanying an arrangement of Le Tombeau by Raaf Hekkema of the Dutch reed Quintet, Calefax, Akropolis tributes the funk, gospel, blues, struts, and church collections of Harlem through an equally upbeat series of vignettes by Harlem native, Arthur Cunningham, entitled, Harlem Suite. Akropolis commissions by composers Stacy Garrop of Chicago and Jeff Scott (also a Harlem native), which highlight their Billboard charting 4th album, Ghost Light, bring forth the dead for consideration in two works which celebrate the ghosts and spirits of our past and our present—Rites for the Afterlife, a 4-movement work walking the listener through the harrowing journey of the soul in Egypian afterlife, and Homage to Paradise Valley, honoring Detroit’s lost Black neighborhoods of the early 1900s.

Stacy Garrop – Rites for the Afterlife

Making Akropolis the first reed quintet to ever grace the Classical Billboard Charts, Ghost Light, their fourth full-length album, was born out of Akropolis’ mission to create new music that connects their audience to one another and the world we share. An “exceptional outfit audibly driven by real excitement and a sense of adventure,” (The Wire) the album features a diverse collection of world premiere works which shine a light on the ghosts all around us and grapples with the issues of mortality and our personal and collective history. The concert program includes selections of each work, including 2018 Pulitzer Prize finalist, Michael Gilbertson, and 2019 Academy of Arts and Letters Award recipient, Stacy Garrop. A masterwork by Jeff Scott telling the history of 3 razed Black Detroit neighborhoods is accompanied by new poetry written by Detroit historian and author, Marsha Music. 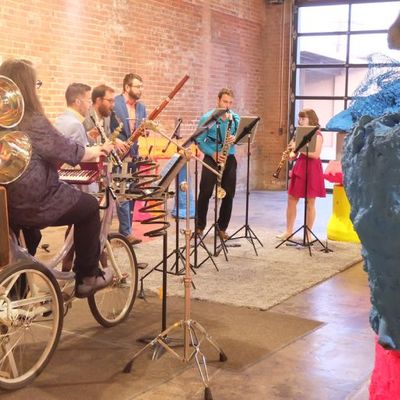 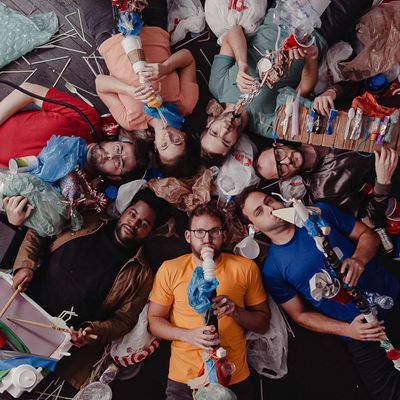 Are We Dreaming the Same Dream 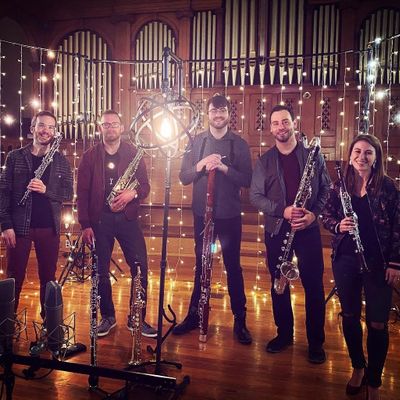 Winner of the 2015 Fischoff Educator Award, Akropolis has engaged more than 40,000 youth during its 13-year history, including an annual, yearlong residency at three high schools in their home Detroit community. As an independent nonprofit they have received grants from the Michigan Council for Arts and Cultural Affairs, Community Foundation for Southeast Michigan, and many individuals nationwide to support their educational programming, which comprises a noteworthy portion of their activity.

Akropolis delivers fast-paced and informative workshops, including its “The Best Story” presentation for elementary schools, featuring a musical reenactment of the Eileen Spinelli children’s book. At the middle and high school level, Akropolis gives performances, coachings, Q&A's, and offers a side-by-side band concerto by Peter Terry.

“I am in awe of your genius in this educational arena and excited for all the young lives that you will impact and change because you are first and foremost extraordinary artists who are bringing that excellence and meticulous preparation and execution to the educational arena.”

Akropolis believes that "quality" in classical music comes not only from the technical competency of the performers, but of the relevance an artist creates within their community. To do this, Akropolis engages their communities nationwide through experiences informed by the communities they serve. This includes collaborating with community members on new musical works, including so much more, featuring interviews with local business owners, and Sprocket, featuring a rideable percussion bike created by scrap metal artist, Juan Martinez. They commissioned new work from Detroit poet Marsha Music, and in their travels have performed with guest percussionists in several communities.

Akropolis has performed at dozens of workplaces during its Detroit Workplace Concert Series, including hospitals, factories, tech companies, and more. They have performed in juvenile detention centers, homeless shelters, development centers, and senior care centers. They have given dozens of outdoor performances at parks and other pop-up locations, including grocery stores and farmers markets. They have given house concerts, backyard concerts, and concerts on river walks and bike paths.

Each concert is custom-designed with community input and shaped to reflect the vibrancy of the community.

Based on Akropolis' 8 year of experience teaching and entrepreneurship and career development, including courses at the University of Michigan School of Music, Theatre, and Dance and the Michigan State University College of Music, Akropolis created Akropolis Mastermind in 2019 and since then have engaged 22 early career artists and over 80 participants in this weeklong career development workshop.

Please visit akropolisquintet.org/mastermind to read the testimonials from these participants' experiences.

At the university level, Akropolis provides customized workshops derived from their Mastermind, including sessions on health and sustainability, marketing/branding, financial planning, project development, and more.

Akropolis also delivers inspiring master classes, reads and premieres works by student composers, and has even collaborated with college students in performance.

“Faultless detail and refreshing artistry. A true joy to sit and listen to, [Akropolis] will leave you transfixed long after the final note.”
- Stephanie Ann Boyd, I Care if You Listen
“A collective voice driven by real excitement and a sense of adventure. There's nothing tentative in their approach, and that extends to their programming of multifariously challenging and imaginative new works.”
- Julian Cowley, The Wire
“Pure gold, shot through with tenderness and grace.”
- Joshua Kosman, San Francisco Chronicle
“Here is range, here is agility and grace”
- Max Christie, The Whole Note
“The ensemble has taken the chamber music world by storm. The performance standards of Akropolis are award winning for a reason.”
- Natalie Szabo, Fanfare Magazine
“The esteemed players balance powerful, adventurous and haunting moments that cultivate chamber sounds like few others would dare to attempt.”
- Tom Haugen, Take Effect
“All of the music is remarkable for the sheer joy that it elicits from the exceptional ARQ musicians Blend, balance, unanimity of pitch and phrasing: all are perfect. The quintet plays with imagination, infallible musicality, and huge vitality.”
- Ronald E. Grames, Fanfare Magazine
“I am in awe of your genius in this educational arena and excited for all the young lives that you will impact and change because you are first and foremost extraordinary artists who are bringing that excellence and meticulous preparation and execution to the educational arena.”
- Kathy Soroka, Allegheny RiverStone Center for the Arts 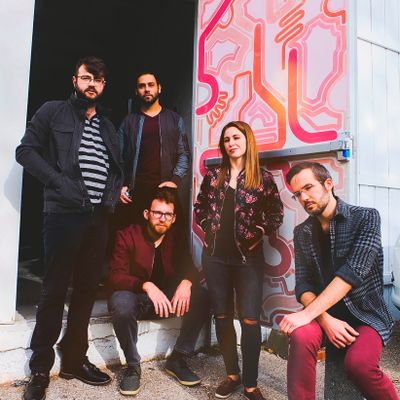 GHOST LIGHT (DEF.)  "a small, single bulbed light, usually a floor lamp of some sort, that shines on the dark stage…