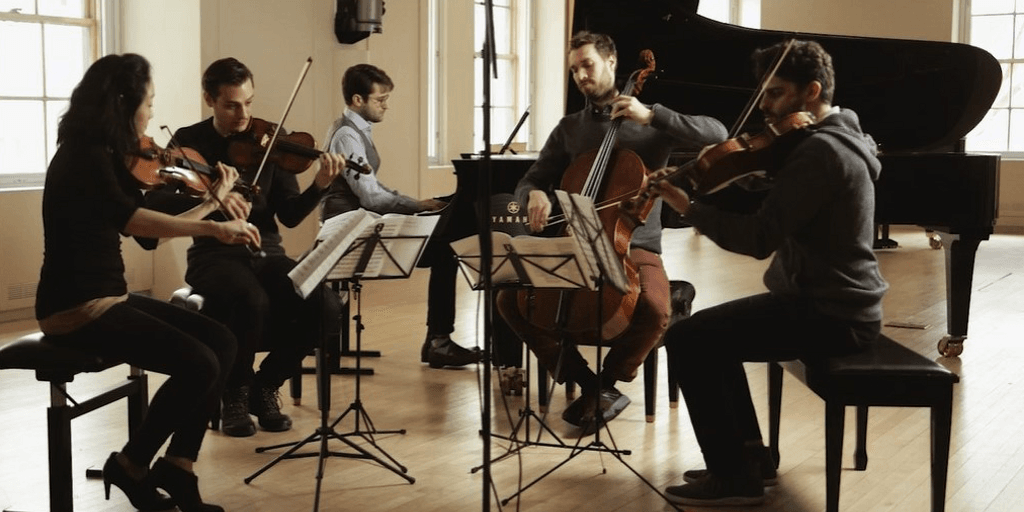 
The Kreutzer Affair is an immersive theatrical concert program created by the Tesla Quartet with pianist David Kaplan, exploring how music was captured into words and then rebottled into music again.

The program’s point of inspiration is the Violin Sonata No. 9 in A Major by Ludwig van Beethoven, known simply as the “Kreutzer” Sonata. The piece is fiery and transcendent, written “in the style of a concerto,” and brought controversy almost from its inception. Originally written in 1803 for the renowned violinist George Bridgetower, Beethoven rescinded his dedication after a drunken argument and gave the honor instead to Rodolphe Kreutzer. Never mind that the great violinist despised and refused to play the piece—it would thereafter be known by his name.

Fast forward a century later, and the towering Russian writer Leo Tolstoy writes a controversial novella eponymous with the violin sonata, in which the music serves as a vehicle for both its plot and its message. The emotional and physical violence of the story bristles, and the story was immediately banned when published in 1889.

Finally, we arrive at Leoš Janáček, the poignant and visionary Czech composer, whose First String Quartet recaptures Tolstoy’s searing narrative into the form of music, masterfully rendering the passion, contradiction, and tragedy of the novella.

In a continuous seventy minute performance, the Tesla Quartet and David Kaplan interweave the three movements of Beethoven’s Violin Sonata and Janáček’s String Quartet No. 1 with dramatic excerpts from Tolstoy’s novella, recited by the musicians themselves.

After intermission, the quartet and pianist join for a musical palette cleanser: Dvořák’s beloved Piano Quintet in A Major, a piece that fuses German musical form with Czech spirit and language.